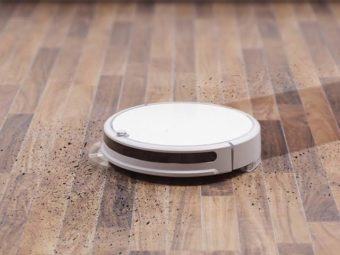 There’s been something of a revolution in the world of robot vacuum cleaners of late, with emerging models offering excellent cleaning power at a reasonable price. The latest robot to join the masses is the Roborock E2 (also known as the Xiaowa E20). Available for $300, this model can not only vacuum but also mop, too, much like its big brother: the Roborock S5.

The Roborock is by no means one of the more popular robot vacuum manufacturers. In comparison to the more well-known and recognizable brands, they aren’t particularly familiar (yet). However, this does not, in any way, mean that the quality of their robot vacuums is worse than those other brands — far from it. In this brief review, we’re going to be looking at the Roborock Xiaowa E20. This is a high-tech robot vacuum that too many people are unfamiliar with, but we’re about to change that for you.

Aesthetics and Design: The Roborock E2 Robot Vacuum comes in two colors — white and dark grey (the E25 model) — and it weighs a total of seven pounds. In terms of height, it is barely over three-and-a-half inches, and is a round, thin cleaner (351 x 353 x 91mm). As is typical with this type of design, you’ll see the usual combination of trade-offs and advantages. While the robot is short enough to enable it to get under a lot of furniture, it will struggle to fit through tighter gaps such as chair legs.

On the top of the vacuum, there are three buttons.

Underneath, there’s a single side brush used for pushing dirt into the main suction path. The main brush is a combination of rubber and bristles, designed to agitate dirt so that it can be sucked up. It also comes with a razor in the box to cut away hair that might become tangled in the brush. This is also where you slide in the water tank with the removable microfibre cloth (two cloths are included in the box) for when you want to mop. The water tank clips easily into place.

Smartphone Compatibility: Chances are, however, you won’t be using those buttons very much, if at all. See, the Roborock Xiaowa E20 has smartphone functionality, which means the only thing you need to do is go on your smartphone and press a few buttons. Using the app, you have access to many features. You can start the robot vacuum, stop it, schedule it, customize the settings. You can also tell the robot to clean a specific spot extra thoroughly, tell it to charge itself, and even control it using directional buttons.

Functional and Powerful: Using 1800Pa suction, any kind of dust, dirt, and debris is quickly sucked up. It’s sucked into an extra-large dirt bin that is especially convenient, enabling you to only empty it every so often, rather than frequently. During the cleaning process, there is a small water tank and mop cloth. This water tank doesn’t leave any water behind, but it does ensure that there is a bit of moisture on the surfaces that it is cleaning. This makes it easier for the vacuum to brush it up and clean it more effectively.

Dual-Gyroscope Navigation System: Above all else, this is the most notable feature that Roborock has added to their Xiaowa line of robot vacuums. Everything else is excellent, no doubt, this new navigation system is truly exceptional. Using thirteen different sensors, navigation is made to be very easy and very efficient. The Dual-Gyroscope Navigation System enables the vacuum to sense all kinds of different “operating angles” for the most suitable cleaning path. Then, while cleaning, it adjusts its own body to be in alignment with those angles.

Motion Sensors: The navigation system, when used in conjunction with dual-optical motion tracking sensors, can calculate each step for the most overall efficiency. But, along with this, a map is created that enables the vacuum to develop and find new pathways more efficiently. This is especially interesting because you can use this with the Spot Cleaning feature. Using your smartphone, you can choose a spot on the map, and the vacuum will go over and clean that particular spot, with more thoroughness than other places it has cleaned.

Mopping Mode: In Mopping mode, it’s recommended that you dampen the microfibre cloth first, then insert the small water tank into the robot. Mopping is controlled by the gravity-fed water system, with the microfibre cloth picking up dirt. It does an okay job, picking up some dirt that the main vacuum can’t cope with. Once the Roborock E2 has finished mopping, water will continue to drop out. Although the Roborock E2 can detect carpet to dial up its power settings, it can’t automatically avoid carpets in Mopping mode. The sticker on the water tank helpfully suggests using the virtual wall feature to prevent the cleaner from maneuvering onto rugs, although the Roborock E2 doesn’t support virtual walls. There’s also a cliff-edge sensor, which prevents the robot from falling down the small step into the kitchen.

Other Features: It’s powered by a 2600mAh battery, which is suitable for up to 1.5 hours of cleaning. As such, you’ll be able to clean larger areas or perform multiple cleans with this robot. Thankfully, the Roborock E2 isn’t particularly loud. Running it in Standard mode and standing above the vacuum, this measures the noise at 67.5dB; upping the power to Max, it measures at 69.5dB. Dropping down to Silent mode didn’t make much difference: there’s less suction noise, but the mechanical noise of the vacuum running over the floor meant that it still measured 64.5dB.

Performance: The Roborock E2 uses dual laser and LED motion tracking sensors to map out its environment so that it can make a single pass of the room. The robot gently nudged into some objects, but neatly made its way around my test rooms. Cleverly, once the Roborock E2 has detected an edge, it moves around so that its single brush sweeps against the side to move dirt; if only it made a second pass to pick up everything.

Unfortunately, the Roborock E2 has no Google Assistant support. Fortunately, though, Roborock E2 supports Amazon Alexa, but it may not be 100% compatible just yet. This is a terrible shame since the Roborock S5 is supported. However, for the few users that have been able to access the app, they complained that it was hard to use, with mistranslations everywhere. Another disappointment is how the vacuum sometimes disconnects from the app, most likely due to compatibility issues.

The Roborock E2 struggled a little with dining chairs. It didn’t get stuck in them, but nor did it manage to clean between the legs. Despite a gap in the chairs, the Roborock E2 didn’t manage to make it that far under the table.

My light kitchen floor can get quite dirty, with three cats trampling dirt into the room. Surface-level dirt was picked up quite well, but deeper stains weren’t eliminated. The more expensive Ecovacs Deebot Ozmo 930 does a far better job at mopping and lets you control how much water is used. That said, for occasional use, the Roborock E2 does a good enough job, and you can see by the dirty microfibre cloth that it was picking up dirt.

To test vacuuming performance, I spread “X” patterns of dirt on the floor, using a combination of carpet freshening powder and flour. The mixture was placed in the middle of the room, by the side of the room and on the carpet. Starting with hard floors first, the Roborock E2 did a pretty good job. A small amount of dirt was left behind at the center of the room, although nothing that a second pass wouldn’t pick up.

By the side of the room, the results were more disappointing. The Roborock E2 managed to sweep the dirt out from the side, but it didn’t manage to pick a lot of it up, leaving a good chunk behind. Carpet cleaning, with the Roborock E2 upping power when it hit the rug, was pretty good. There was a trace of dirt behind, but it wasn’t significant.

Overall, the Roborock E2 is an incredible robot vacuum. It is very advanced and offers the peak of convenience, power, efficiency, and navigation. For all of those reasons, it is a genuinely great purchase, especially if you want the best. But, for those same reasons, it may not be the best choice for you if you don’t need that level of performance. This is a “high-end” robot vacuum, and as such, it is a bit more expensive than other models. And if you don’t think you’ll use all of these features, then it’s best to find a model that is a bit less expensive, and perhaps, more focused on the basic features.

Navigating with a higher degree of precision than many budget robot vacuum cleaners, the Roborock E2 punches way above its price. Throw in the fact that it can also perform the occasional mop, and it seems a bargain. That said, some things hold it back. At times the E2 will miss dirt, sweeping it away from the wall and then running away. The lack of Amazon Alexa support is also a touch disappointing, given that the bigger Roborock S5 offers such support. The competition is intense: if mopping isn’t a priority, then the Ecovacs Deebot N79S may be a better choice.

If you want a robot that will mop brilliantly, then you need to spend a bit more on the Ecovacs Deebot Ozmo 930. For better all-round cleaning, you’ll have to pay extra on one of the more expensive machines in our list of Best Robot Vacuums. However, if you’re after a device that can clean and mop at a low price, it’s hard to beat the Roborock E2 in terms of value — although you may need to get it to do a couple of sweeps for the best performance.