Are inflatable paddle boards any good? 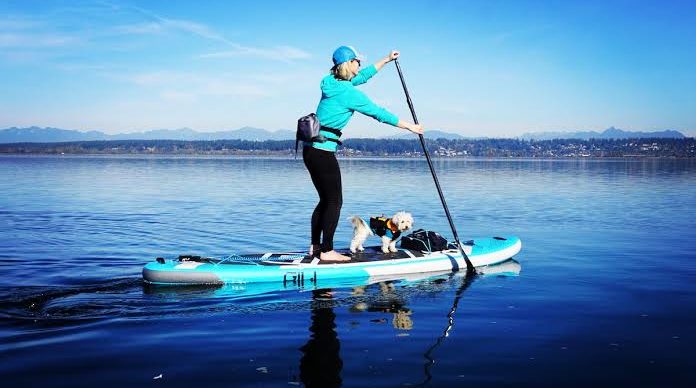 When the time comes to choose the type of paddleboard to purchase, a lot of people ask, “are inflatable SUPs any good?” or “are they worth it” in comparison to a regular hardboard. Here, we take a look at the main factors of storage and transport, convenience, safety, and performance to see if inflatables are worth it?

What’s the Difference Between Inflatable and Hard Boards?

Hard boards are solid boards with an EPS foam core that is then covered (also known as laminated) with layers of fiberglass and other materials such as carbon, wood, bamboo, or other materials to make up the hard outer shell.

Inflatables, on the other hand, are made of two-sided PVC vinyl drop stitch material that is then glued together. They are entirely hollow to allow them to be inflated with air. To inflate, you use the included hand pump and invest about 15 minutes in inflating.

Inflatables come in backpacks that are about the size of a large suitcase. They take up quite a bit less space than hard boards and can be stored in a closet quite easily. If you have minimal storage space and can not store a hard board, then an inflatable stand up paddleboard is worth it. When it comes to transporting your inflatable board, they are also a lot more convenient, since you can take them with you comfortably anywhere. However, when you get to the water, you have to inflate your board. Most do not realize how hard it is to inflate an iSUP to usable air pressure. Prepare yourself for 15 minutes of very hard, hot, and tiring pumping every time you want to go paddling.

Safety When In Use

Inflatable boards, when holding air pressure, are themselves safe. However, the issue of safety arises if they stop holding their air pressure while paddling. Nearly all inflatable stand up paddleboards are a single chamber design, meaning all the air is in one chamber. In the case of a significant and sudden air loss, such as a failed valve or blown seam, your board will instantly lose all its air, rendering it unable to support your weight.

Performance can be a bit subjective. However, when we look at performance, we looked at glide speed, stability, and tracking.

Inflatables, being filled with air, are not as stiff as hard boards. Some boards that inflate to higher air pressures (17psi and higher) will feel reasonably stiff, but still nowhere near as thick as a hardboard. Cheap iSUP that does not inflate to 15psi will feel like you are standing on an air mattress. They will be soft and flex in the middle under your weight. Being softer, inflatables boards will flex more from the tip to the tail when paddling in rougher waters.

Are Inflatable Paddle Boards Worth It?

Unfortunately, as our analysis has shown, inflatable paddleboards don’t perform well, and only excel in storage and transport aspects. For our money, inflatable stand up paddleboards aren’t worth it when compared to hard boards. Other cases where an inflatable board could be something to consider is if you are a white water paddler or if you plan to travel extensively by airline — an iSUP can be checked as baggage, whereas hard boards are subject to oversize handling fees. However, if you are looking for the most convenient, the safest, and the best performance stand up paddleboard, then inflatable paddle boards aren’t the best choice, and it might be better to consider a hardboard.

SereneLife Inflatable Stand Up Paddle Board